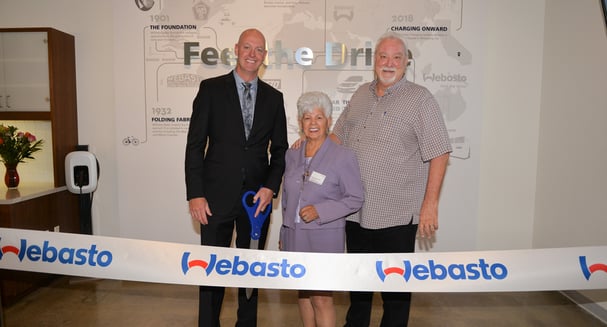 Before the ribbon-cutting ceremony, Congresswoman Napolitano and Mayor Adams met with the management team who reaffirmed our commitment to the local community and announce plans to add more than 30 technology jobs focused on global advancement of eMobility. Our special guests also went on a tour of the facility, and participated in an electric vehicle charging demonstration. After the ribbon-cutting they addressed team members of Webasto Charging Systems. The Congresswoman and Mayor presented CEO John Thomas with commemorative certificates. After the ceremony, team members were treated to lunch and games to celebrate the special day.

Congresswoman Grace F. Napolitano represents California's 32nd District. Her Los Angeles County based district covers several cities and communities that directly impacts team members of Webasto Charging Systems. Congresswoman Napolitano is the highest-ranking California member of the U.S. House Committee on Transportation & Infrastructure where she currently serves as Chairwoman on the Subcommittee on Water Resources and Environment. This subcommittee oversees EPA's Clean Water Act and the US Army Corps of Engineers water programs. The Congresswoman is a cosponsor of H.R. 2040, the Electric CARS Act which re-establishes both the electric charger tax credit and the electric vehicle tax credit.

Mayor Tom Adams was elected to his first term on the City Council in 1994 after serving a term on the Monrovia Planning Commission. He was elected as Mayor in 2015 and 2017. The Mayor was born in Monrovia, CA and has lived here his entire life. He currently serves as the City Council liaison to the Monrovia Old Town Advisory Board while being a delegate to many other local organizations.