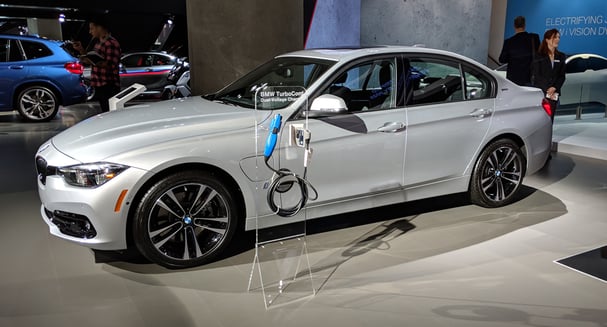 The New York Auto Show is always an exciting event for car enthusiasts, but this year's show was truly electrifying.

Held in late April at the Javits Center in Hell's Kitchen, the 2019 New York International Auto Show featured more than 40 vehicles using some form of battery power, and awarded its top prize to a luxury EV sport utility vehicle.

There were dozens of conventional hybrids, plug-in hybrids and pure battery-electric vehicles on display, and automakers as diverse as Ford, Hyundai and Daimler AG announced their intentions to introduce dozens more of those plug-in EVs over the next few years.

"The industry is going through tremendous change, and there's no better example of that than the number of electrified vehicles now coming to market," Mark Schienberg, head of the Greater New York Automobile Dealers Association, which organizes the auto show, told CNBC.

This also marked the first year that there were two electric vehicles among the finalists: the Jaguar I-PACE and the Audi e-tron, which finished a close second in the World Green Car and World Car of the Year categories.

The I-PACE, the Jaguar brand's first electric vehicle, carries an impressive EPA-estimated range of up to 234 miles, and can accelerate from zero-to-60-mph in 4.5 seconds, according to Forbes.

While many of the EVs at the New York Auto Show had already debuted prior to their appearance in the Big Apple, there were some notable EV premieres at the expo.

One showstopper was the Genesis Mint Concept, a shiny, spearmint green subcompact EV that manages to feel stylish and spacious despite its small size. While most easy-to-park city cars sacrifice good looks in the pursuit of practicality, the Mint is a two-door, two-seat small car that nevertheless has the low, sloping roofline of a sports car. The interior is also designed to feel larger than it really is, with a big, wide dashboard mounted on a pivot, and a bench seat that angles itself toward the driver when the door is opened.

Kia also turned some heads with its preview of what the next-generation Niro will look like. The cute HabaNiro concept, named to recall a spicy chili pepper, boasts a quoted 300-mile EV range that should excite fans of the crossover car, notes Motor Trend.